Decision-making: "The best way to face the future is to understand the present"

At sea, arguments arise when the boat is drifting, off-course, in the doldrums. When the wind is strong, when the boat is sailing at a good clip, everyone is paying attention and there is no time for personal or banal matters. This is what CEDEC does at our client companies: we mark a destination according to the owner's wishes, we set a course that everyone is comfortable with, and we can all enjoy the sailing.

Decision-making: "The best way to face the future is to understand the present"

Throughout history, humans have faced multiple dilemmas, both as individuals and as a collective. Progress and evolution have largely depended on the choosing correctly from possible alternatives.

For this, Nature has offered us a wonderful gift: free will; that is, the ability to choose.

Therefore, we can conclude that our personal development depends largely on the quality of the decisions we make. On the other hand, depending on the activity or role that life has given us, the quantity of decisions that we must face may be quite varied. But it is a tangible reality that in the world of business, the number of decisions to be made, and their importance, are well above average.

At the CEDEC Group, as privileged collaborators in Strategic Business Management, we live this decision-making process with business owners every day. In fact, we could say that we live in the world of decision-making, because this is the only path towards corporate progress (unless we want to leave our future to chance or to third parties).

In companies, specifically, there is something that differentiates the owners, the directors, the managers, and the staff: limits to decision-making. The higher we go in the hierarchy, the more important and critical the decisions we must make.

The elements that favor correct decision-making are many: identifying the problem, analyzing the alternatives, familiarity with the available resources, and adaptation to a specific business strategy. But at the CEDEC Group, we know that the most important thing, the beginning of any decision, depends on the quality of the information available.

We are not referring to the amount of information available, but to its relevance. To know what will happen in each of the future scenarios and alternatives we are thinking of, we must have an in-depth understanding of the current situation.

History gives us hundreds of examples of mistakes that were committed due to a lack of correct understanding of the present situation. Let the following anecdote serve as an example:

After World War II, when the various reparations which Germany had to pay to other countries were established, England was offered the Volkswagen auto company as compensation for its war “expenses.”

The British replied that cars with engines in the back end had no future and they settled for placing an order for 20.000 units to help relaunch the company in Germany; the company came under the control of the German government.

A few years later, Volkswagen was producing nearly 4.000 vehicles a day, having produced over one million vehicles...

This teaches us that, in some way, the reality of the moment was unknown. This analysis error led to an absolutely unfortunate decision.

Analyzing a company is not only understanding the data, the situation, the market, or the staff: analyzing means understanding.

For the CEDEC Group, analyzing a company through the work of our Analysts means living a unique experience of reflection and immersion in the company’s world, relating information, causes and effects, desires and goals, and internal and external realities in order to propose concrete, viable, realistic solutions adapted to the situation, allowing the business owner to make the best decisions.

Prepare for the company’s future by planning an orderly succession

It may sound utopian to talk about planning the future of the business for a business family, but if we analyze our day to day, both personally and professionally, we plan each day before scheduling what we do — although the time windows in which we do so may be so immediate that we do not perceive it. Some plans are so automatic that we do not even distinguish them, and we plan trips,...

Family Business or a Business-oriented Family?

CEDEC FAMILY PARTNER is much more than behavioral instructions, an organization, or a Family Protocol. CEDEC FAMILY PARTNER is based on respect for a business owner’s foundational culture and philosophy, adapting to a modern, secure, and professional management that ensures the ultimate purpose of family business: to offer family members a serene and positive future. All companies and... 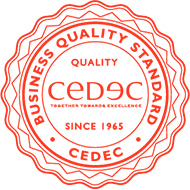